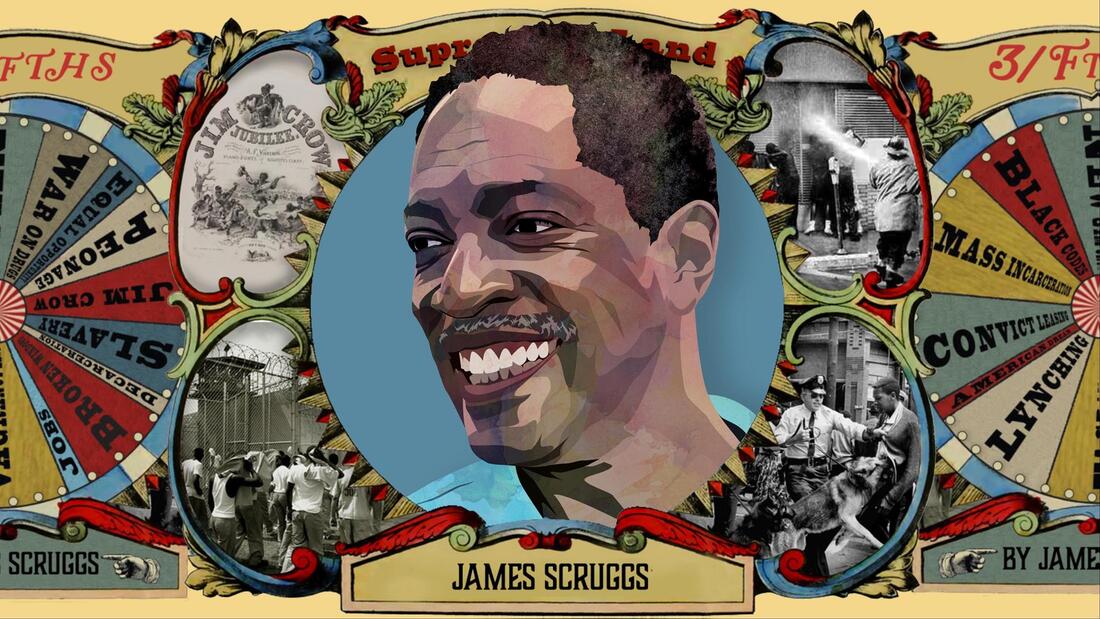 Currently working with Rattlestick Theater to create a solo work with video about his intimate connection to the 9/11 tragedy called Severe Clear.

He was awarded The Boston Theater Critics Association Elliot Norton Award for Outstanding Production Fringe Theater for his show, presented by Sleeping Weasel,  Trapped In a Traveling Minstrel Show in November 2017.

3/Fifths his theatrical work exploring race and racism today; informed by the history that is sometimes deemed too disturbing to explore transformed the 10,000 square feet of 3LD Art & Technology Center into a dystopian theme park called SuprmemacyLand.

3/Fifths was one of four New York Times "Must See" productions in May 2017
"Immersive theater routinely makes audience members uncomfortable, but Mr. Scruggs is on a level all his own with “3/Fifths." NY Times May 2017

3/Fifths was a Timeout Magazine NYC four star Recommended theatrical production
"The insidious brilliance of SupremacyLand lies in the way that Scruggs, along with directors Tamilla Woodard and Kareem Fahmy, co-opt the conventions of immersive theater to deliver a powerful message." Timeout NYC May 2017


JJames Scruggs is a writer, performer, producer, teacher, speaker and arts administrator who creates large scale, topical, theatrical, multi-media work usually focused on inequity or gender politics. He is currently working with Rattlestick Theater to bring Severe Clear, a solo performance work with video exploring his unique intimate relation to the tragic 9/11 event. He was employed by Windows on the World in the WTC North Tower and was on vacation on 9.11.2001, due back to work on 9.12.2001. His work in progress version of A Voluptuary Life was a solo performance work about one man musing same gender loving lives across the ages. It was shown at HERE Arts Center, NYC in March, 2019. MELT !, was a site specific, fully immersive work with actors musicians and radical audience participation. It was commissioned and performed for one day on The High Line in NYC. “It’s The Annual Post Racial America Day Rally!” It’s May 17, 2060! White people in America have been a minority for 17 years. The Mixed Race, gender fluid president of USA, who refuses to disclose birth gender or race has come to speak.  Trapped in a Traveling Minstrel Show is an intimate piece exploring race through the lens of a deconstructed minstrel show structure premiered in Boston on November 3-11, 2017. It is largely about the fact that in 2017 actual dashcam and documentary footage of unarmed black men police shootings have become completely subjective, and must be 'white-splained' to black people to see how the officers feared for their lives.  His piece,  3/Fifths SupremacyLand was a “Must See” production in The NY Times; Timeout stated: “The insidious brilliance of SupremacyLand lies in the way that Scruggs, co-opts the conventions of immersive theater to deliver a powerful message.”It premiered and ran for the month of May, 2017 at 3LD Art & Technology Center in NYC. He conceived, wrote and produced the fully interactive 3/Fifths, which enlisted over 30 collaborators, 23 actors, 46 channels of video,  spread over 5 performance spaces spanning over 10,000 square feet. It was inspired by Disposable Men, his 2005 multi-media solo performance work, which juxtaposed images from Hollywood monster movies with the harsh reality of the historical treatment of black men in America. It was produced by HERE Arts Center. Previous theatrical works include Touchscape, An Emotional Striptease; Tickets To Manhood and Deepest Man, an experimental work with a 3D holographic projection surface exploring freediving as a cure for grief produced by and premiered at 3LD Art &Technology Center. He is currently a Fieldwork facilitator for The Field and a Professional Development Program facilitator for Creative Capital.  James Scruggs has a BFA in Film from School of Visual Arts.
​

Theatrically, I consider myself an outsider artist with considerable experience. I have a BFA in Film Production, and experience in corporate audio visual staging and production. In fact I was the TD at Windows On the World on the 107th floor in the World Trade Center in 2001. I was on vacation, due back on September 12th. It was a great job. I made lots of money. After getting through my great personal loss of friends and co-workers on 9/11, I decided to focus on what I once considered extracurricular; the nurturing of my creative spirit which was quelled by the pursuit of money. I didn't learn in an academic setting that your first play does not get produced. I'm grateful for this ignorance. One of the first plays I wrote and performed in was Disposable Men, a solo theater work examining the phenomenon of unarmed black men being killed by policeman. The piece lyrically and literally  juxtaposes the plight of Hollywood monsters onto unarmed black men. Though laden with technology, the response it elicited was almost always an emotional, visceral one. This is what greatly interests me, to create work with technology that is not about the technology.